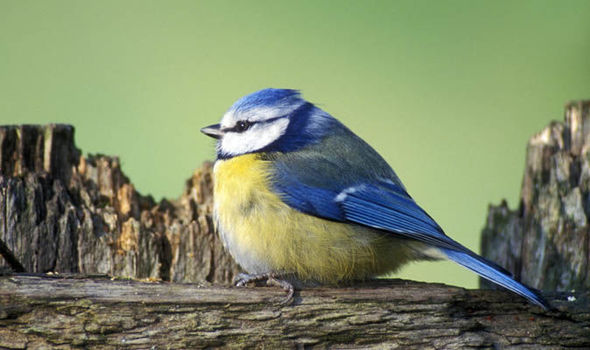 The start of April is an interesting time for birds. Redwings and fieldfares that fed on rotting apples over the winter are now leaving for Scandinavia, while sandmartins and chiffchaffs are just arriving. Our resident birds are starting to nest and you may find that blue tits and great tits are already building nests in boxes. Swallows have not arrived yet but are probably crossing the Straits of Gibraltar at the moment. When they arrive here in a couple of weeks they are first seen over the reservoir flying low over the water catching insects. It will be another month before swifts arrive. Green woodpeckers can be heard most days calling loudly and flying over our plots, while greater spotted woodpeckers drum on resonating dead branches so their presence is carried far and wide.

Overhead, look out for cormorants as they come into land on our reservoir on a stopover from Draycote, or the North Wales coast. They usually circle around a few times before landing in the water. Another large black bird to look out for overhead is the raven. It produces a characteristic three (deep) croaks as it flies about, usually 2 or 300 meters high, and often in a pair. On a sunny warm day, buzzards usually circle over the allotments making a distinctive call to declare their territory, and ward off other competing males. Sparrowhawks also circle around high up looking for a meal; they are smaller than buzzards and can often be seen flapping their wings half a dozen times before gliding again.

Robins and blackbirds are already nesting in hedges or maybe your shed! Magpies seem to everywhere and I have seen a pair nesting in an old crow’s nest high up in a tree near the reservoir. Jackdaws also seem to be very common at the moment still moving around in groups. Goldfinches too are starting to nest and are now just seen in pairs. Greenfinches used to be common but their numbers are very low at the moment. Song thrushes, however, seem to be coming back and our ban on using metaldehyde slug bait probably has a lot to do with their recovery. Their spring song, along with blackbirds’, provides the background and volume to the dawn chorus each morning at this time of year.

Warblers from Africa will be returning this month. Willow warblers and blackcaps are the two most common around our allotments. They sing mainly at dawn and dusk but when they first arrive, they warble away most hours of the day as long as the sun is out.

Finally keep an eye out for the peregrine falcons that are nesting with 4 eggs in the tower of the town hall a mile away; they are seen occasionally flying over the allotments. They take birds as large as wood pigeons, so are definitely popular amongst vegetable growers!

Looking for a plumber

About St Marys
St Mary’s Allotments are situated on the Radford Road on the outskirts of Leamington Spa. The site was established by 1894 and it featured in reports of shows held by the St Mary’s Cottagers and General Horticultural and Industrial Society from that year onwards. At a meeting in 1909, held in the former Oak Inn on Radford Road, St Mary’s Allotment Association was formally created.

The Association currently has over 300 members cultivating 414 plots.

This website uses cookies to improve your experience while you navigate through the website. Out of these cookies, the cookies that are categorized as necessary are stored on your browser as they are essential for the working of basic functionalities of the website. We also use third-party cookies that help us analyze and understand how you use this website. These cookies will be stored in your browser only with your consent. You also have the option to opt-out of these cookies. But opting out of some of these cookies may have an effect on your browsing experience.
Necessary Always Enabled
Necessary cookies are absolutely essential for the website to function properly. This category only includes cookies that ensures basic functionalities and security features of the website. These cookies do not store any personal information.
Non-necessary
Any cookies that may not be particularly necessary for the website to function and is used specifically to collect user personal data via analytics, ads, other embedded contents are termed as non-necessary cookies. It is mandatory to procure user consent prior to running these cookies on your website.
SAVE & ACCEPT